“Fly-over” country has a different meaning for me.  Every spring and every fall, thousands of birds migrate over our farm.  Canada geese, snow geese, sandhill cranes, and several species of ducks pass over our farm on their way to their breeding grounds.  Often, they stop and spend the night, or even several days.  They feed on the short, green blades of winter wheat in our field.  They search for early-hatching bugs in our pasture.  They sleep on our pond.

One recent morning, I awoke to several hundred Canada geese sleepily floating on our pond.  They became agitated and began honking noisily as Russell and Fern exited our enclosed porch and walked across our farmyard. 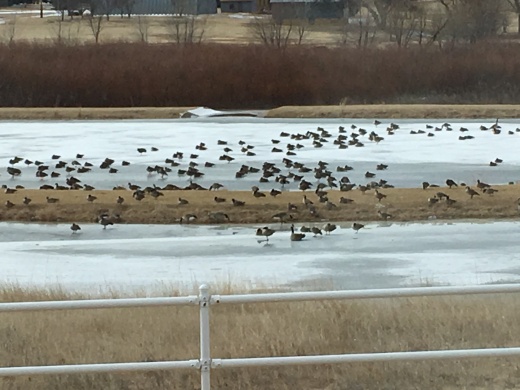 When our dogs were still pups, they learned very quickly that they got scolded if they chased the migrating geese.  So, on that morning, like all other mornings, the dogs sat quietly and watched the geese, but did not attempt to chase them off.

Later, after completing my morning chores, I used our Ranger, an all-purpose utility vehicle, to fill the various wild animal feeders that I have scattered around our farm.  One of those feeders is very near the pond.  I knew the geese would take off as I approached the pond with the Ranger, and I was right.

It was a sight to behold.  After a cacophony of raucous warning honks, the geese lifted off the pond in unison.  The flapping of those mighty wings overhead so greatly disturbed the air, that it sounded as the whirring blades of a hovering helicopter.

They all took flight.  Except for two.  I smiled.  Fred and Ethel were back! 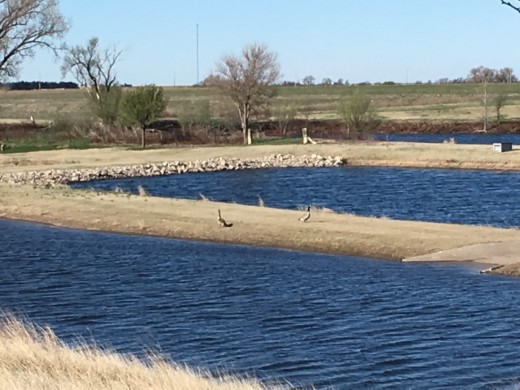 Canada geese typically mate for life and can live up to twenty-five years in the wild.  They often return to the same breeding grounds year after year.  Fred and Ethel have raised their babies on our land for almost a decade now.  When the rest of the geese noisily took off in fear, Fred and Ethel remained, calmly and quietly swimming on our pond.  They knew me, they knew the dogs, they knew the Ranger.

Often, the dogs will jump into our pond to cool off (they’re Labs, remember?), swim around a bit mere yards from Fred and Ethel, and each species will pretty much ignore the other.

I refuse to explain where the names Fred and Ethel came from.  Many of you, I am sure, will recognize the monikers immediately and smile at the memory.  For those of you who don’t, well, any explanation simply would not do them justice anyway.  You just had to be there.

When I see Fred alone, or Ethel alone, it’s very difficult for me to tell one from the other.  Their markings and coloring are identical.  When I do start seeing one without the other, I know the eggs have been laid, and one of them is watching the nest.

When together, Fred is obviously larger than Ethel.  And when they are all together with their babies as a family unit, their behaviors are different too.  The goslings tend to cluster around Ethel, mimicking her, feeding where she feeds.  Meanwhile, Fred will stand alert a slight distance away.  Head held high, he spends his time surveying their surroundings.

The nurturing, instructing mother and the vigilant, protective father, together with their brood.  Isn’t that how we would like to picture our own families? 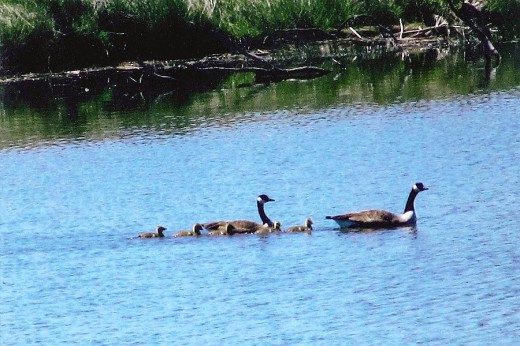 We can learn a lot from Fred and Ethel.

(I share a touching Canada goose story in the February chapter of my third book The Return to the Family Farm.)