A while back, Danny and I were preparing to leave for Rapid City, South Dakota.  It was not a vacation, and we weren’t going to take in all the tourist sites, although Mount Rushmore, the Badlands, and Wall Drug are all worth the trip.  No, we were headed to see our youngest son, his wife and our two youngest grandchildren, who reside in Rapid City.  Sometimes we fly, but this time we had decided to make the 9+ hour journey by car.

Although our family visit was everything we had hoped it would be, that’s not what this blog is about.  Instead, I want to tell you about the morning we left our farm.

It was still dark when I got out of bed.  With the long trip ahead of us, we had planned for an early departure, so I rose promptly at the sound of the alarm and went to the kitchen for a cup of coffee.  (I call my stiff, early morning walk “the coffee shuffle”)

The eastern horizon was barely beginning to lighten, but when I turned on the porch light I could see that it was foggy.  I turned on our weather radio to listen to the forecast while I was making the bed and getting dressed.  Every farmer has a weather radio.  It would be absolutely foolhardy in tornado alley to not have one.  Cities have their sirens, but out on the farm we rely on our weather radio, our instinct, and our common sense. 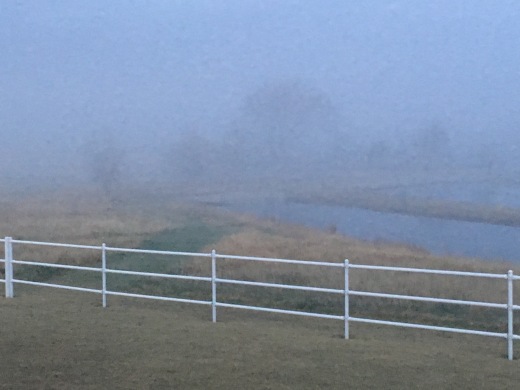 Anyway, the fog was expected to burn off quickly, so it would not be a travel hazard.  What it was, however, was beautiful.

When I left the house for my morning chores, the sun had still not risen above the horizon, but I was able to walk to the barn without artificial lighting.  The farm had an ethereal, surreal quality about it.  There was not a stitch of wind, and the fog captured and absorbed each sound wave so that every noise seemed close and magnified.  I became aware of the crunch of my boots on the gravel path as I walked to the barn.  I heard the trill of a meadowlark, the cackle of a pheasant, and the honking of a goose on the pond.  I knew all of these birds were far from me, yet they sounded as if they were right beside me as I strode to the barn.

I stopped for a moment and looked around.  Through the fog, I could faintly make out the fuzzy headlights of one lone truck about a half mile away – an early morning commuter or oil-field pumper on his rounds.

My dogs were trotting beside me, but when I got close to the barn, I saw that the horses were not in the corral.  They typically spend the night in the pasture, and were not yet expecting me at the barn.  My arrival at the barn was about an hour earlier than my typical routine.

When I entered the barn, I immediately turned on the exterior barn lights.  I figured that the horses would see the light and come to the barn.

I fed the dogs and cats, and the horses still hadn’t come to the barn.  So, I stood in the corral and called their names.  With no wind, I knew they could hear me call, even in the farthest corners of the pasture.  I called and I waited.  Then I heard it.  The pounding of hooves on the pasture ground, and I knew that BJ would be first.  A horse in full gallop, mane and tail flying, is always poetry in motion, but the vision of him as he burst through the early morning mist literally took my breath away.

It was definitely worth getting up for.

BB followed next, then Zip, but they both approached at a much slower pace than the younger, fitter BJ.  Even when the pasture is lush with green grass, I still call my horses in twice daily to check them for injury, illness, etc.  As I ran my hand across them that morning, I felt the dampness on their bodies, and I knew they had been lying down when I had called.  Horses periodically doze while standing up, but they still need to get off of their feet for about four hours per day. 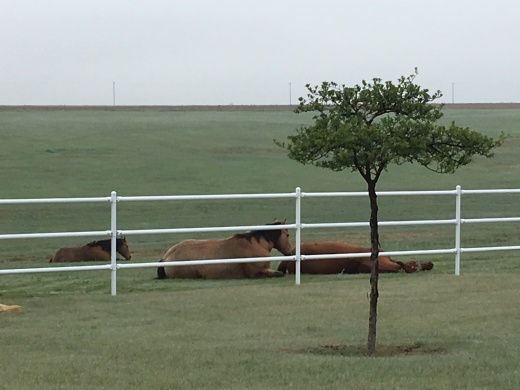 On my walk back to the house after my completed chores, I noticed a yellow-headed blackbird sitting on the ground near the corral fence.  I hadn’t seen one of them in years!  As if the fog hadn’t been enough of an early-morning gift, I had just received another!  I hoped that meant that the blackbird had returned, would stay awhile, and would bring some friends. 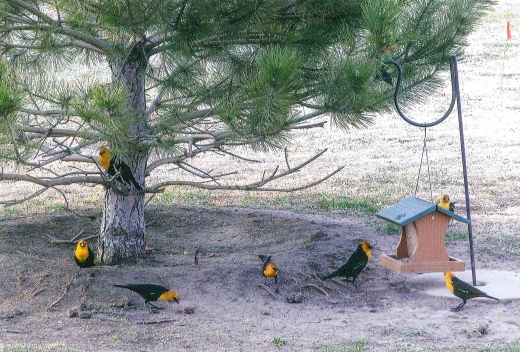 When we leave the farm for extended periods, as we planned to that day, my adult nephew feeds and cares for our animals.  He lives only a few miles from our farm, and he checks on them at least twice daily.  I know how lucky I am to have someone I trust care for our farm when we are gone.

The drive away from our farm that morning was bittersweet.  I was so anxious to see our children and grandchildren again, but I felt just a twinge of sadness at leaving the farm.  And I was reminded of my father.

Years ago, shortly after my parents had retired from dairy farming, Danny and my dad were sitting on the farmhouse porch one beautiful summer evening.  Danny asked my dad if he planned to now, finally do some traveling.  Dairy cows need to be milked every twelve hours, rain or shine, winter or summer.  There are no vacations.  And finding someone to take over the milking can be harder than just staying home and doing it yourself.  My parents left the farm only a handful of times in their thirty years of milking.

But when Danny asked my dad that question, Daddy raised his arms and opened them wide as he slowly swept them across the horizon.  He said to Danny, “Why would I ever want to leave this?”

(My favorite story of my dad is in the June chapter of my second book Another Year on the Family Farm.)

Next week:  Fred and Ethel are back