I come from a large family.  I had six siblings, and by today’s standards, that’s large.  At the time, however, it didn’t seem so large.  I knew many kids whose siblings numbered in the double digits, so my family of seven kids was not unusual back then.

Case in point:  It was getting close to suppertime one day in early spring.  My mom was cooking in the kitchen and I was playing on the floor very near her.  My two youngest brothers came into the house after their evening chores.  One of them casually told me, “Well, looks like the Easter Bunny won’t be bringing you anything this year.  Mikey killed it.”  He nodded toward the front door.  My other brother just grinned.  Horrified, I ran to the front door, and sure enough, I witnessed our farm dog, Mikey, returning home after a day of hunting with a limp rabbit in his mouth.  I realize now that rabbit was a cottontail, but back then I believed with all my heart that our dog had killed the Easter Bunny.  Of course, I began to sob uncontrollably.  My mother quickly reassured me that the dead rabbit was NOT the Easter Bunny, and then, with her hands on her hips, scolded my two laughing brothers with “Will you boys leave her alone!”  It was not the only time she ever uttered that phrase.

When I was a pre-teen, my Godfather brought me a baby rabbit one year as an Easter gift.  Mom said I could use the old rabbit pen that my brothers had used years before for their 4-H projects.  I struggled to come up with an appropriate name for the rabbit.  My mom suggested “Harvey” after the 6-foot invisible rabbit in the James Stewart movie.  Even then, I loved old movies.  Harvey, it was.

A few months later, a classmate wanting to get out of the rabbit-raising business offered me a free rabbit if I took it off his hands.  I named him Henry.  I figured Henry would be the perfect companion for Harvey.  Boy, was I ever right.

Turns out, “Henry” was a Henrietta.  I discovered that fact when I found dead baby bunnies in the cage with them.  You cannot leave the father in the same cage with the babies.  It was one of those hard-learned farm lessons that you never forget.

I thought about these childhood rabbit stories the other day as Danny and I were spring-cleaning our rabbit pen.  Right now, we have two bunnies – Salt and Pepper.  I’ll give you a couple of seconds to figure out which is which. 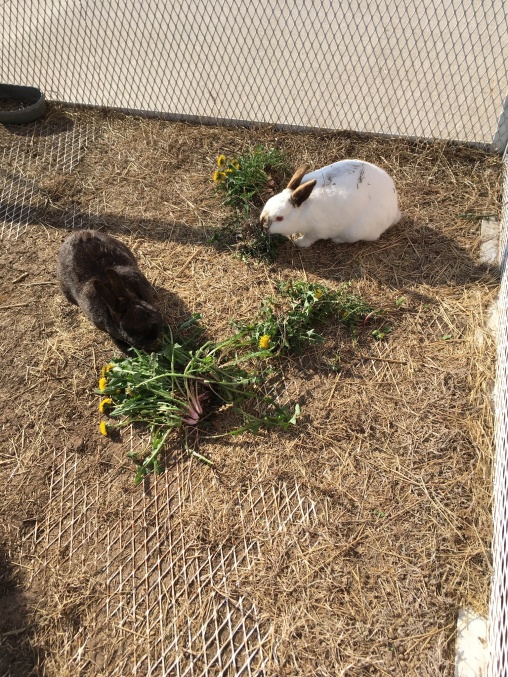 After we moved back to the farm, we took the visiting grandkids to the Farm and Home store to see the baby bunnies.  Of course, they wanted to take some home.  (Did anyone see that one coming?)  Danny was not thrilled with the idea, but I was an easier sell.  I had such great childhood experiences with rabbits, after all.  What could possibly go wrong?

Have you ever tried to determine the sex of a bunny?  Without becoming too graphic, just know that things don’t, well, dangle like they do in other species.  It’s pretty hard to tell what you’re dealing with.  Plus, there’s a lot of fur.

I know what you’re thinking right now, and … you are right!  There’s also a 50% chance of babies.

A few months later, after witnessing some quite randy behavior in the cage, I surmised that Oreo (named by our oldest granddaughter. Suited him perfectly.) was to become a father and Princess (named by her Disney-infused younger sister.  Thank goodness the names weren’t switched!) was to become a mother.  Trust me.  There was no confusion on that one.  (The accompanying photo shows Princess with BB and BJ.) 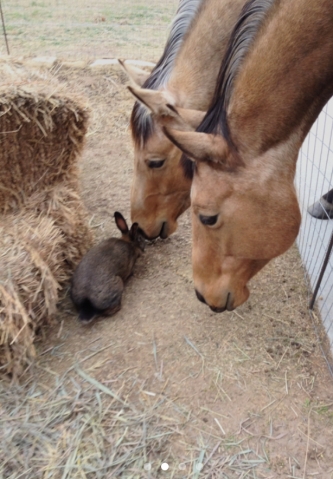 I was determined to raise these babies to adulthood.  So, I borrowed another rabbit pen and separated the two rabbits.  Then I did some research – gestation length, what the mother needs to build her nest, etc.  I set a box lid inside Princess’ cage and gave her some loose hay to work with.  She built the most beautiful nest!  And she lined it with her own soft fur.  I did not witness the birth, but she gave birth to eight squirmy, hairless blobs that turned into the cutest, softest, cuddliest creatures ever!

I kept two, Salt and Pepper, and gave the rest away.  I wanted no more babies.  My vet determined that both Salt and Pepper were male so I had them, and their father, neutered.  Sadly, both Princess and Oreo have now passed.  But Salt and Pepper are still active and healthy.

Danny and I decided our bunnies needed more room to roam, so we built an outdoor fenced area big enough for lots of activity.  Initially, the floor was the natural ground.  But when we discovered that they were tunneling their way to freedom, we covered the ground with a steel mesh floor that still allows grass to grow, but eliminates jail breaks.

We use hay bales for their shelter.  I set them up like a maze so they can hide like they do in nature, with more bales for the roof.  Inside, they create a cozy home by covering the floor with hay they pull from the bales.  When they need to poop or pee, they leave their home and go to the furthest corner of the fenced area to do their business.  I never find a single milk dud inside their home.

One more quick rabbit story:  For a while, we kept Flopsy, a rabbit that my sister had purchased for her grandkids, in the same pen with ours.  Now, to fully appreciate this story, you need to know that both of our dogs chase, and occasionally catch, wild rabbits.  But they never bother our pet rabbits.  Somehow, they just know that these rabbits are our pets and they are off-limits on their doggy menu.  At the time we got Flopsy, we still had our own four rabbits, so she became the fifth rabbit in the pen.  Neither of our dogs witnessed the arrival of Flopsy.

The evening of the first day that Flopsy joined our family, Fern, our female lab, nonchalantly walked past the pen as I did my evening chores.  Suddenly, she froze, then went into immediate attack mode.  She stared at Flopsy, circled the pen as Flopsy hopped, and scratched the fence to try to get at her.   In the midst of five rabbits, she had recognized a stranger!  How?!  Was the scent different?  Did she recognize the difference by sight?  It took only a couple of days before both dogs understood that Flopsy was also part of our family now, and they once again walked nonchalantly past the rabbit pen.

(If you enjoyed the story of my siblings, I tell many more “brother”, and also “sister”, stories in all three of my farm books.)

Next Week:  It’s Really Not a Fish Story