Did you know that 80% of Americans live in urban areas?  Do you know anyone from the other 20%?  Would you like to?

My name is Mary Kay Schippers and I am among the 20%.  I live on a farm in the Western third of Kansas.  I am a fourth-generation Kansan and have never lived outside of Ellis County.  In fact, my husband and I live on the land my great-grandfather purchased over 125 years ago.  This is not, however, the same farm on which I was raised.  That farm is a little over three miles away, but is also still in the family.

My husband’s name is Danny, and I first met him in 1970 when we were high school freshman.  I never dated anyone else and we have been married for over 43 years now.  His business colleagues call him Dan, but he will, to me, always be Danny – the tall, skinny kid I first met in high school.

We have two sons, two daughters-in-law, and six grandchildren.  We have truly been blessed.

Danny and I have not always lived on a farm.  We raised our sons in Hays, a small city fifteen miles from where we now live.  Hays is small, but modern, with a first-class medical center and a state university.  It was originally a frontier fort, the same Fort Hays that was referenced in Dances with Wolves.  The frontier town that sprang up next to the fort was known as Hays City, referenced often in episodes of Gunsmoke.  The Fort and/or Hays City were, at one time, home to George Armstrong Custer, Buffalo Bill Cody, Wild Bill Hickock, and numerous unfortunates who now reside on Boot Hill.

While living and raising our sons in Hays, I made a career out of teaching mathematics, first at the high school level, and later at the university.  I retired from teaching seven years ago.

My ancestry is 100% German and Volga-German (Germans from Russia).  So is my husband’s.  Actually, that is not unusual for a large portion of the citizens of Ellis County.  Our sons, on the other hand, are half English and half French.  (That last part isn’t true.  I was just checking to see if you’re still paying attention.)

Danny and I are both born and raised Roman Catholic.  We participate faithfully and can count on one hand the number of times we have deliberately skipped mass in our lifetimes, with fingers to spare.  Again, that is not unusual in these parts.  I just now mentally counted nine Catholic churches in our mostly rural county.  I’m pretty sure I have forgotten some.

I am hopelessly old-fashioned, and proud of it.  I understand that comment may seem incompatible with the fact that I am writing a blog.  Just know that as I write this, I am imagining that I am writing a column for a newspaper that will be printed using movable type on a rotary printing press.

I am extremely organized.  As such, I spend absolutely no time looking for misplaced items.  A cousin, Bill, took notice of my neat and tidy home during one of his visits.  He teased me about being OCD, and to prove his point, moved an item on a side table.  Then he challenged me by saying, “You’re going to move this back, aren’t you?”  I slowly shook my head and said, “Bill, Bill, Bill.  If I were OCD, I would need to move it back right now.”  Then I smiled, winked and added, “But I can wait till you’re gone.”

I have a flash-in-the-pan temper.  This is immediately evident to anyone who uses the needle-nosed pliers from my toolbox and does not return it to its proper spot.  (See previous paragraph.)

I don’t get too worked up over politics.  This is probably because I don’t watch TV news.  I get my national, international, state and local news from our hometown newspaper.  That way, whenever I find myself sinking into a state of utter despair, I can quickly turn to the last page where I find my favorite comics.  A quick read of Zits and Baby Blues and once again, all is right with the world.

I do, however, vote.  I have never missed an election, and God willing, never will.  I feel I owe that much to all the citizens of this world who would give their right arm for the opportunity to vote in a truly democratic election.

I am a stickler for recycling.  I will dig through the kitchen trash to retrieve the errant plastic cap that some unknowing guest had earlier thrown away.  When my garage is filled to overflowing with bags of paper, plastic, metal and glass, and my organized soul can no longer stand it, I load the bags into the back of my four-wheel-drive Tahoe and drive fifteen miles to the nearest recycling center.  The irony of this is not lost on me.

I am most comfortable around animals and young children.  I have never met either an animal or a young child that I have not immediately liked.  I cannot say that about every adult I have met.

I love old movies.  Even the grainy, black-and-white old movies.  I don’t watch soap operas or talk shows, but I have a weakness for old movies.  If I have any down time during the day it will be spent with my embroidery in front of the TV watching a decades-old movie.  Gregory Peck was so hot.  Don’t even get me started on Paul Newman.

I love music.  All kinds, really.  Rock, country, blues, bluegrass, classical, Celtic, Gospel.  Except rap.  Rap sounds angry to me.  There is enough anger in this world.  Everyone knows that we are what we eat.  I also believe we are what we see and what we hear.

I get teary-eyed and my throat closes every time I sing The Battle Hymn of the Republic or listen to Paul Harvey read his essay So God Made a Farmer.  I do not consider this a character flaw.

So, in a nutshell, you have now met the author of this farm blog.  Once a week, I will share musings from the life of a 20%-er:  someone who wakes up to the sound of honking geese instead of honking cars;  someone for whom the “one-finger wave” means raising your index finger from the steering wheel as a greeting to the farm neighbor you pass on the county road; someone who watches the sun rise over the horses’ pasture instead of an apartment building.

Next week:  It’s Springtime on the Farm! 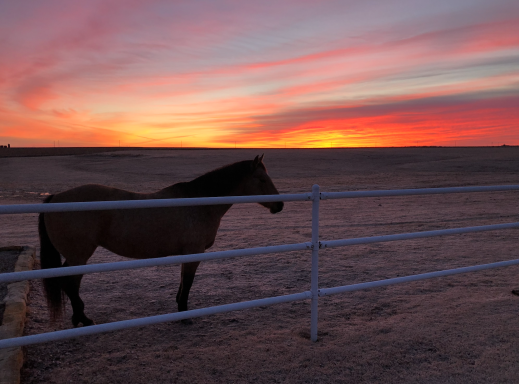 One thought on “Greetings from the Farm”